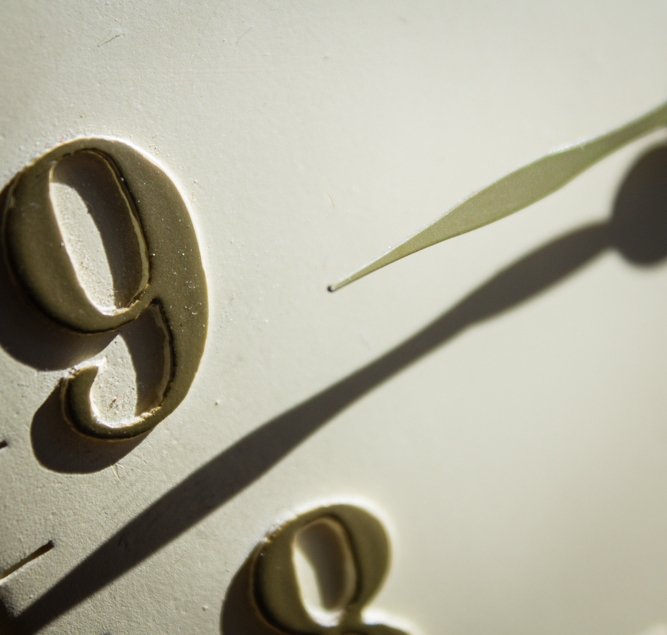 The clock ticks. In time with its monotonous beat I find myself fidgeting: first with a strand of hair that curls mischievously from the centre of my tightly-wound bun, then with my hands, my skirt, the top button of my shirt.

In the armchair next to me, Mrs Bentley is talking. I’m trying my best to ignore her.

‘This is the fifth funeral I’ve been to in a month,’ she is saying. ‘I like funerals; they remind us of our mortality.’ She moves her head into my eye line and smiles, yellow teeth bared, red lipstick smeared inadvertently across the top row. ‘Marjorie Miller up at number eight died only ten days ago. Her funeral was on Monday. They put on an interesting spread, funny little curried things I wouldn’t even give to my dog!’

Mrs Bentley flinches. ‘Sorry, dear. I was just asking if you knew her. Marjorie Miller?’

She nods, grey curls bobbing. ‘I’ve got another one next Tuesday. Tom Phillips. He lived just over the road. Lovely man he was. His wife used to be a cook at the school so the food should be top notch.’ She pulls a notebook from her handbag and begins scribbling. I hope it isn’t a scorecard.

Fifteen minutes later, Mrs Bentley’s notebook lies abandoned on Grandad’s coffee table as she twitters on about a programme she’s been watching on the telly.

My hands are now a tight-fisted ball. I take a long, slow breath. ‘Mrs Bentley, most of Granddad’s friends are meeting at the church.’ I nod hopefully in the direction of the bus stop. ‘It might be sometime before the hearse arrives.’

For a moment there is silence. The wrinkles around Mrs Bentley’s mouth droop down towards her chin.

I shift uncomfortably. ‘I mean, you could wait, but-’

‘Oh don’t worry about me, dear.’ She straightens her back, her eyes moving across to Grandad’s photo. ‘I’m happy to wait. Perhaps we’ve got time for a cup of tea if he’s going to be a while? I’d do it myself, but I had a hip replacement a few weeks ago – your granddad might have told you – and it’s still painful to walk.’

He had told me. Told me how he’d taken two buses and a taxi to get to the hospital to take her in her favourite book. I was so angry: ‘You shouldn’t be going anywhere, Granddad. You’re too ill. She should never have asked you.’ But he’d laughed it off, told me she’d do the same if things were the other way round.

‘He has some regular tea, dear. It’s in a little box at the back of the cupboard, to the right of the kettle, next to the breakfast cereal.’

I raise my eyebrows. Underneath several layers of pink blusher, I think I see Mrs Bentley’s cheeks redden.

She’s staring at the tea. Steam is rising in small delicate wisps from the rim of one of Granddad’s impeccably clean ‘guest cups’ and yet still Mrs Bentley does not touch it.

She drags her eyes across to me. ‘No, no, it’s just I normally have…’ she shakes her head, ‘doesn’t matter.’

We wait. After ten minutes the ticking silence is interrupted by the soft caw of a nightingale and I smile at the memory of granddad’s exaggerated groan every time a different bird chirped the hour. Mrs Bentley is watching me. She leans forward in her chair.

‘I bought him that clock, you know, for his birthday.’

I frown; since when did they buy each other birthday presents?

‘Starlings were his favourite. They’re not everyone’s cup of tea, some people find all the noise they make very irritating. But they’re very sociable birds; often live in a flock, which is nice, isn’t it? From a distance they’re very plain looking, but if you get up close you’ll see they’re a wonderful mixture of colours. I think that’s why they were your granddad’s favourite; he could see the beauty in them that so many people never took the time to find.’

My mouth is open; I can feel warm air drying my tongue, the insides of my cheeks. I turn again to his photograph, to the gold band that wraps itself tightly around the third finger of his left hand and momentarily I hear his voice: ‘She’s been a very good friend to me, you know, since your grandmother died. She brings me casseroles and apple crumble and all sorts of things she thinks I can’t make for myself. She listens.’ I remember snorting at that last part, my subsequent comments derisive and mean, and he’d looked at me as if I were stranger, his kind eyes unblinking in their new evaluation of me.

Mrs Bentley is coughing. The sound draws me back. For a moment I stare unapologetically at the woman in front of me: the crumpled tissue held tightly between gnarled, arthritic hands; the poorly-applied make-up cracking and crumbling beneath uncharacteristically puffy eyes.

She looks over at me and smiles, her lips pursed, her eyes crinkled. Before I can say anymore, she turns her head away towards the window.

I sit back in my chair and, after a couple of minutes, resume my fidgeting.

In the evening, I return to Granddad’s house. The kitchen hasn’t been packed away and I make a slow start on the crockery, piling it into empty boxes as my mind returns involuntarily to Mrs Bentley.

Once the hearse had arrived, the old woman had reapplied her lipstick and, after making polite conversation with the undertaker, had insisted on giving us both a full weather report for each of the four funerals she had already attended this month. At the church, her loud, untuneful voice had drowned out the respectful tones of the congregation and her tactless pronouncement that my sandwiches were too dry at the wake seemed almost a compliment compared to what she was saying about the rest of the food. In the end I’d left in silence, ducking out whilst she held court with the few locals that remained.

I sigh, loosening the top button of my shirt as I pour away her cold tea. And then I spot them: two cups sat together on the draining board. They haven’t been washed properly and a dark circle of tea tarnishes the china inside. They’re faded, well used, a familiar sight in his house, but it’s the red mark that clings to the rim of the smaller cup that really catches my eye and as the hour strikes and Granddad’s silent house is filled with the incessant chirp of a starling, I find myself pulling back the curtains, searching in the darkness for a house across the street; unsurprised, when I do, to find Mrs Bentley looking back.